FORT LAUDERDALE – Is it the end of surge pricing as we know it? Are the days of a surge pricing multiple of 2.8x converting a trip that should cost $15 to end up costing the rider $42 over? Not exactly…

Dynamic pricing which factors into account the demands for the service at a particular time and location along with the availability of Uber Partner-Drivers will remain in effect with Uber’s new roll out of upfront fares, however this new upfront fares platform means you will see your fare “upfront” with no math and no surprises with dynamic pricing already factored into the cost.

Uber is moving to upfront, per trip fares so that riders know how much a ride will cost in advance. As a rider, you will not see lightning bolts and pop-up screens for surge pricing, instead upfront fares will be calculated based on how many riders and drivers are using Uber at the time.

So, surge pricing (sort of) remains in effect – Uber is simply taking out the element of surprise out of the equation. The fare will still feature a dynamic element which will fluctuate based on availability of drivers which is “excellent” news for Uber Partners all around the world who know that dynamic pricing is a great cash cow especially in peak demand times and the holiday season.

“Surge pricing during peak demand will still be in effect, however riders will know the total cost of the ride upfront in the busy time”, as stated by ABC News. The shift was initiated by the popularity of the UberPOOL service which accounts for over 20 percent of all Uber rides globally. 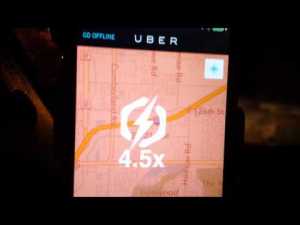 The shift might be great news for Uber Partners who look forward to the holidays and peak times for extra cash. Even during heavy weather storms when fewer Uber Partners are serving an area, the surge multiple can add up to $90 or more in your pocket quickly in less than one or two hours.

Even with upfront fares, the “supply and demand” element of Uber economics remains in effect and Uber is simply offering more transparency and less surprises.

According to TechCrunch, “The new costs are calculated similarly to the old “x” surge pricing so you might still end up paying a ridiculous sum in certain places or times of day where demand for a ride home is going to be high.”

Uber Partners can feel rest assured that while surge pricing as we know it is over, dynamic pricing is here to stay and the dynamic element of price calculation will continue to put more cash in the pockets of Uber Partners in peak demand and holiday season high demand zones.

Get an unsecured credit line at 0% interest!

Create your own WordPress Site!

Work on a Luxury Cruise Ship

Get Blog Posts for your Site!

Sow a Seed of Love for Haiti